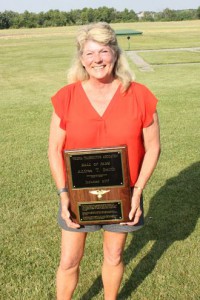 Andrea Smith served as President of the Virginia Trapshooting Hall of Fame from 2005 through 2015, and continues to serve as Vice Prresident. She continues to hold silent auctions to raise money to assist the different youth groups which are supported by the Hall of Fame. She also serves on the Board of Directors for the Virginia Shooting Sports Association to protect trap shooter’s rights and protect the rights of all Virginia gun owners. Her devotion to trapshooting is unsurpassed as she has worked with the Virginia Trapshooting Association in many areas, placing vendors into appropriate spaces and other campground functions. Her expertise in holding registered trap shoots at the Piedmont Sportmen’s Gun Club over the past several years throughout the winter months has enabled many shooters to acquire sufficient targets to avoid both yardage and classification penalties. 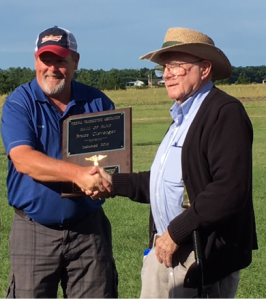 Bruce’s service to the Virginia Trapshooting Association (VTA) and the Virginia Trapshooting Hall of Fame (VTHOF) has been mostly through his many contributions at and for the Winchester Gun Club (WGC). He has served in many capacities over the past 20 plus years at WGC, from director to President and is currently serving as a VTA Trustee. His biggest contribution is ongoing, that being his Tuesday Night Summer League Trapshoot which averages around a dozen full squads weekly from mid-April to late September. This has provided a much needed income to WGC and next to the Virginia State shoot provides the club with its second largest annual monetary gain. He also has expanded the league to include several squads of junior shooters and works with the AIM program to promote and fulfill the VTHOF commitment to youth shooting program. For more than twenty years, Bruce has assisted and provided support to the VTA and WGC; he continues to work with the different group to improve the facility, equipment and grounds. 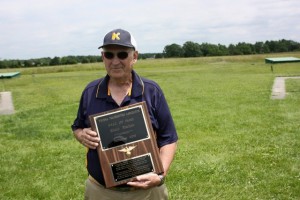 Blair Surber started trapshooting in 1986 and since then has amassed more than 124,000 singles, 102,000 handicap and 83,000 doubles targets shot at, joining the quarter million club in 2007. During his shooting career, he participated in and won major trophies at the North East Grand, the Southern Grand, the Empire Grand, the South West Grand, the Grand American, the Heartland Grand, the Southern Zone, and at several state shoots. 2009 was an outstanding year for Blair, during which he won six Grand American trophies, was the Southern Zone Singles Runner-up Champion with a score of 200 plus 200 extra in the shootoff, and ended the year with a AA-27-AA classification. Blair was Captain of the 2010 ATA Senior Veteran All American Team and was on the 2011 Senior Veteran first team. He served on the Winchester Gun Club Board of Directors, and as a VTA Trustee for 2 terms 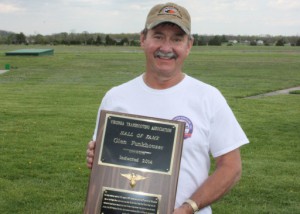 Glen Funkhouser joined the ATA in 1988. He started shooting registered targets in 1989 and shot his way to the 27 yard line by 1991. Glen has been on every Virginia State Team since 1991. He maintained a 99.7 singles average in 2003. Glen won all three Virginia State titles multiple times: singles in 1997, 2003, 2004, and 2012, handicap in 2007 and 2008 and doubles in 2005 and 2010. He won the state all around in 2010. In 2013, Glen won the sub veteran singles class championship and singles championship on the way to winning the sub veteran high overall and high all around. He won multiple events at last year’s Hall of Fame and Old Dominion shoots. He also holds several zone and Grand American trophies. Glen is a member of the Winchester Gun Club and serves on the Board there. In addition, he is a youth instructor and coaches new shooters. He helps train participants to score, work in the trap houses and run score sheets during registered and non registered shoots. Glen Funkhouser was inducted into the Hall of Fame because of his exceptional efforts both in shooting and in working and promoting the sport of trapshooting. 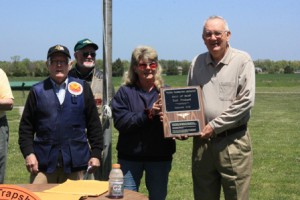 After setting records in skeet, Earl started shooting trap in 1987 and has been a devotee ever since. Among his many trophies are the Virginia Singles Champion in 2000, the State Doubles Championship in 2001, and the State Veteran’s Doubles Championship in 2010. In addition, Earl has been on Virginia State Teams for eleven years. Earl served as president of the Richmond Trap & Skeet Club for 10 years and has been Secretary of the Virginia Trapshooting Association for many years. By default Earl took on the role of the VTA’s shoot photographer as well as awarding all trophies. For many years VTA event winners had their pictures taken, framed and a write-up prepared and ready to be published; all of this done by Earl hundreds and hundreds of times. 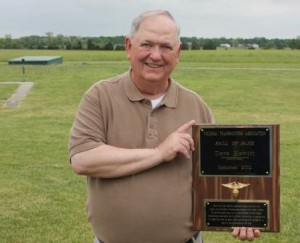 Dave Hewitt started registering targets in 1978 and has shot at approximately 160,000 birds garnering many trophies including the Virginia State Handicap Championship. In addition, he tied for the state doubles championship. He served several years as the Vice President of the Virginia Trapshooting Association, but his primary contribution to trapshooting in Virginia has been his great efforts promoting and working for our sport. Dave’s home club is the Christiansburg Gun Club that depends entirely on volunteer workers to host 14 registered shoots annually. For more than thirty years, Dave has been a leader of these volunteers. He serves as cashier and shoot manager as well as completing the required supporting paperwork. This work requires a few hours of effort before the shoot, much time and work during the shoot and 2 – 3 hours of work after the shoot. This is what makes a shoot happen. Dave creates an atmosphere that brings the shooters back. Dave was instrumental in the planning and execution of improvements at the Christiansburg Gun Club which included new access road and walkways to the club. This was no small feat, as the Christiansburg club sits on the side of a mountain. Trapshooting in Virginia is dependent on shooting events at our many smaller clubs. These smaller clubs depend on efforts of a few hard workers. Dave has worked very hard for over thirty years so that we can drive to the club, shoot targets and then drive home feeling that the experience was memorable and look forward to another shoot on the mountain. 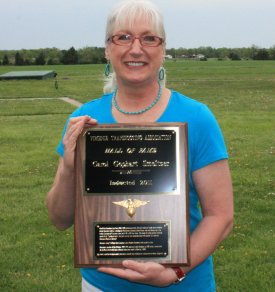 Carol Smeltzer shot ATA trap from 1983 until 1988. During that time, she was on three ATA All American teams. She won numerous Grand American trophies including Preliminary Handicap Ladies Winner and twice was Runner-Up in the Ladies Champion of Champions event with 99 X 100. She holds the ladies national handicap yardage record of 6 1/2 yards earned in one year. She has won numerous shoot offs against both male and female All American shooters. Carol won many Virginia state titles including the Ladies Singles Championship three years in a row, as well as handicap champion and ladies overall champion. Carol shot in several winter leagues in Virginia and Maryland, coached – including at at George Mason University, and ran or helped at shoots in northern Virginia. In international trap shooting, she was a member of the US Shooting Team in 1989 and 1991 and was Ladies Champion in 1989 with a record score. At the World Moving Targets Championships in Moscow, she was a member of bronze medal winning ladies double trap squad.

David is a life time member of the ATA and has registered over 250,000 targets. He has been shooting registerd targets since 1969 and has been a long time member and officer of the Winchester Gun Club. David previously served as the Vice President of the VTA as well as a trustee. He also formalized the VTHOF as an IRS approved, tax-exempt, 501(c)(3) corporation.